CIA’s Charles Cabell, brother of the Mayor of Dallas, Earle Cabell- if looks could kill

Posted on February 5, 2014 by vincepalamara 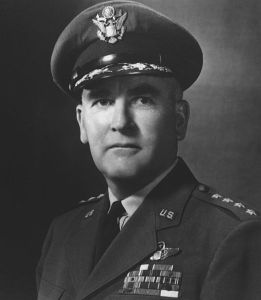 He was the son of Ben E. (son of Confederate general William L. Cabell) and Sadie E. (Pearre) Cabell and attended Oak Cliff High School in Dallas, Texas Earle Cabell (October 27, 1906 – September 24, 1975), was a Texas politician who served as mayor of Dallas, Texas. Cabell was mayor at the time of the assassination of John F. Kennedy and was later a member of the U.S. House of Representatives. He was son of Dallas mayor Ben E. Cabell and grandson of Dallas mayor William L. Cabell. CABELL, Earle, a Representative from Texas; born on a farm, south of Trinity River in Dallas County, Tex., October 27, 1906; graduated from North Dallas High School in 1925. He was the brother of Charles Cabell, who was Deputy Director of Central Intelligence until he resigned in the wake of the Bay of Pigs invasion. In May 1961, he was elected mayor to succeed Robert L. Thornton- the RL Thornton Freeway (sign) was near the assassinationFor five years following his graduation from the academy, Lieutenant Cabell served with the 12th Field Artillery at Fort Sam Houston, Texas. He then was assigned to the Air Corps Primary Flying School at Brooks Field, Texas, from which he graduated in February 1931 when he went to Kelly Field, Texas. He completed the observation course at the Air Corps Advanced Flying School in June 1931 and remained at Kelly Field as a flying instructor. He was transferred to the Air Corps July 11, 1931. In September 1934 he became a flying instructor at the Air Corps Primary Flying School at Randolph Field, Texas. Captain Cabell later served as post adjutant and in September 1938 entered the Air Corps Tactical School at Maxwell Field, Ala., from which he graduated in June l939. In August 1939 he was detailed to the Command and General Staff school at Fort Leavenworth, Kan., from which he graduated in February 1940.

http://en.wikipedia.org/wiki/Jack_Crichton_(Texas_businessman)
John Alston Crichton, known as Jack Crichton (October 16, 1916 – December 10, 2007),[1] was an oil and natural gas industrialist from Dallas, Texas, who was among the first of his ranks to recognize the importance of petroleum reserves in the Middle East.[2] In 1964, he carried the Republican banner in a fruitless campaign against the reelection of Governor John B. Connally, Jr., then a Democrat, who in 1973 switched parties.Cabell attended Texas A&M University, where he met Jack Crichton and H.R. “Bum” Bright, and Southern Methodist University. After returning from college, he founded, along with his brothers, Cabell’s Inc., a chain of dairies and convenience stores. He later became involved with banking and other investments. In May 1961, he was elected mayor to succeed Robert L. Thornton.On February 3, 1964, Cabell resigned as mayor of Dallas in order to run for Congress. He unseated the ten-year Republican incumbent Bruce Alger. In that same election, Jack Crichton was defeated by a wide margin by the Democratic Governor John B. Connally, Jr., and George Herbert Walker Bush fell to Senator Ralph W. Yarborough. Cabell served four terms in the House before he was defeated by the Republican Alan Steelman in the 1972 election. A heavy military intelligence presence pervaded Dallas on Nov. 22, 1963. That morning, FBI agent James Hosty met with an unnamed Army Intelligence officer. Secret Service agent Winston Lawson, who approved the motorcade route, was a member of Army Intelligence Reserve (AIR). Deputy Police Chief and AIR officer George Lumpkin rode on the motorcade’s pilot car. James W. Powell, another AIR officer, was stationed in front of the Texas School Book Depository, and was present when the rifle was found on the sixth floor. The local head of Army Intelligence was oil man Jack Crichton, who recommended the first Russian interpreter used by the Secret Service in questioning Marina Oswald. The true nature of Lee Oswald’s connection to miliary intelligence remains obscure because Defense Intelligence Agency files on him were never shown to the Warren Commission and were later “routinely ” destroyed.

In 1952, he was an enthusiastic promoter of the U-2 spy plane, along with Allen Welsh Dulles and John Foster Dulles.

Cabell became Deputy Director of CIA under Allen Dulles. He was forced by President Kennedy to resign, on January 31, 1962, following the failure of the Bay of Pigs Invasion. Cabell’s brother, Earle Cabell, was Mayor of Dallas when Kennedy visited that city and was assassinated, on November 22, 1963

President Kennedy asked for Cabell’s resignation and the general was subsequently replaced on February 1, 1962, as the C.I.A.s deputy director. General Cabell’s subsequent hatred of John Kennedy became an open secret in Washington. He would later return to the Pentagon, after being relieved of his position at the CIA by JFK, where he would describe the President as a “traitor”. Cabell never forgave the President, and criticized him publicly and often. On one such occasion in 1962, he was introduced to the Foreign Policy Association of New Orleans by Clay Shaw.The Washington Post revealed in 1973 that New Orleans District Attorney Jim Garrison was preparing as late as March 1971 to accuse Charles Cabell of conspiracy in the Kennedy assassination

He left an autobiography “A Man of Intelligence: Memoirs of War, Peace and the CIA” published in 1997. More than 100 pages are devoted to his CIA service, and of particular interest here are his candid comments about the Bay of Pigs operation in which he was directly involved. His assessment of the reasons for its failure are dispassionate, but do not mince words. General Cabell had a fascinating and rewarding career. His book is a valuable contribution to the history of Air Force intelligence and the early years of the CIA. Copies may be obtained from BG Cabell by calling (719) 592-0472; fax (719) 592-0230

On April 23, 1953, while still an active Air Force officer, he was appointed deputy director of the CIA. In 1956, along with the CIA’s Richard Bissell, he flew to Bonn, to brief the West German Chancellor, Konrad Adenauer, on the U-2 program. Adenauer allowed U-2 planes, pilots, and support teams to be based at Wiesbaden. He was promoted to full general in 1958.

In 1965 he was appointed a consultant to the National Aeronautics and Space Administration.

From Jim Garrison’s book: “The Dallas parade route, published on the right five-sixths
of the front page of “The Dallas Morning News” for Friday,
November 22, 1963, showed the motorcade running down Main
Street straight through and beyond Dealey Plaza. As the
chief city administrator, the Mayor of Dallas–who in 1963
was a Mr. Earle Cabell–would have to know and officially
approve any such eleventh hour change. Earle Cabell had a
brother named General Charles Cabell who had been the deputy
director of the CIA–the number two man–under Allen Dulles
for nine years, until he was fired by President Kennedy
after the Bay of Pigs fiasco of which General Cabell had
been the Agency’s man in charge. General Cabell’s subsequent
hatred of John Kennedy became an open secret in Washington.
However he was never even called as a witness before the
Warren Commission.”
http://en.wikipedia.org/wiki/Earle_Cabell 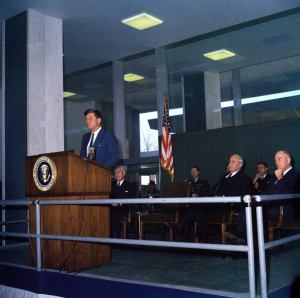 Vince.
Thought I would mention that one of the influential people that attended the advance planning meetings for the Dallas trip was the Mayor of Dallas in 63 and I think it was Earle Cabell or Eric ?. Doesn’t really matter. I distinctly …remember during a conversation at the dinner table weeks following (that surreal day), my father telling my mother that “the Mayor thought agents riding on the back of the car (which was common protocol) would send a message and did not want his city to appear dangerous to the world though the media. He asked for subtle security exposure if and where possible.”
On that day only two individuals would have been able to direct such an order and that would have been the President himself or Floyd Boring SAIC. In my opinion, and you know about opinions, if you find out who else was in that chain of command “during that moment” you will be able to rationally determine why the agents jumped down for a portion of that politically motivated route through the city.

Take care Vince and please don’t give up.
——–
Vince Palamara Thanks alot, Stewart! Yes, Earle Cabell, the brother of the CIA’s Charles Cabell (fired by JFK over the Bay of Pigs), was the Mayor…and you are correct re: Floyd Boring. I admire your father (he is spoken of and pictured in The Kennedy Detail) and MOST of the agents…except Boring, Roberts, and Greer 🙂
——
Hi Vince. Very glad your still on the case. You know your making a difference when “Big Brother” is watching and complaining. I have reviewed your blog and I think your tenacity and perserverance will some day bring the truth to light. It DOES matter. Hang in there with greater vigilance and determination now. You got-em worried.
On another note, I noticed my dad was not mentioned as one of the A[T]SAIC on the Kennedy Detail in Dallas. As you know, he was waiting for the president at the Trade Mart. Just sayin.