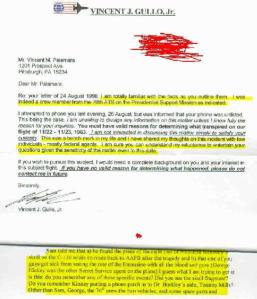 [Gullo: 8/27/98 letter to Vince Palamara—I wrote “Sam [Kinney] told me that a) he found the piece of the right rear of President Kennedy’s skull on the C-130 while en route back to AAFB after the tragedy and b) that one of you guys got sick from seeing the rear of the limouisne with all the blood and gore…do you remember any of these specific events?”Gullo responded: “…I am totally familiar with the facts as you outline them…This was a bench mark in my life and I have shared my thoughts on this incident with few individuals—mostly federal agents. I am sure you can understand my reluctance to entertain your questions given the sensitivity of the matter even to this date.”(emphasis added); Gullo did not respond to my follow-up letter; see also “The Great Zapruder Film Hoax” by James Fetzer (2003)]

[other names via Sam Kinney/copy of flight manifest—also found in CD 3 exhibits-LBJ Library. This manifest was also referred to in George Hickey’s report dated 11/30/63 (18 H 761, 764) but was not included in the volumes]

(Kinney finds the back part of JFK’s skull lying in the rear of the car and puts in a phone patch to Dr. Burkley aboard Air Force One hours before “official” limousine inspection)

Information is being sought on the 22 Nov 1963 C-30 flight from Love Field, Dallas that transported JFK’s ‘death car” & the SS ‘Queen Mary’ from Love Field, Dallas. KLRD TV, Dallas briefly showed the aircraft during the beginning of its live JFK AF-1 arrival coverage (the on air reporter mis-identified the plane as a 2-engine C-123). SS agent Samuel Kinney annotated in his 30 Nov 1963 SS statement that the aircraft departed Love Field with JFK’s touring car & the SS ‘Queen Mary’ onboard at 3:35 PM CST & landed at Andrews AFB at 8:05 EST, but it is not logged in the 1254th ATW logbook as having arrived anytime 22-23 Nov 1963 at Andrews AFB.

If you were onboard that flight (tail # 12373) assigned to the 76th Transport Sqdn, Charleston Air Force Base, South Carolina or have any information concerning that flight & the experiences of the crew please contact:

Presented without profit under Fair Use for global educational purposes.

Vincent Palamara was born in Pittsburgh and graduated from Duquesne University with a degree in Sociology. Although not even born when President John F. Kennedy was assassinated, Vince brings fresh eyes to an old case. In fact, Vince would go on to study the largely overlooked actions - and inactions - of the United States Secret Service in unprecedented detail, as well as achieving a world's record in the process, having interviewed and corresponded with over 80 former agents (the House Select Committee on Assassinations had the old record of 46 with a 6 million dollar budget and supboena power from Congress), not to mention many surviving family members, White House aides, and even quite a few Parkland and Bethesda medical witnesses for a corresponding project. The result was Survivor's Guilt: The Secret Service & The Failure To Protect President Kennedy. Vince is also the author of the books JFK: From Parkland To Bethesda, The Not-So-Secret Service and Who's Who in the Secret Service. All told, Vince has been favorably mentioned in over 120 JFK and Secret Service related books to date (including two whole chapters in Murder in Dealey Plaza, The Secret Service: The Hidden History Of An Enigmatic Agency by Philip Melanson, and the Final Report of the Assassination Records Review Board, among many others), often at length, in the bibliographies, and in the Secret Service - and even medical evidence - areas of these works. Vince has appeared on the History Channel, C-SPAN, A COUP IN CAMELOT, KING KILL '63, THE MAN BEHIND THE SUIT, National Geographic, PCN, BPTV, local cable access television, YouTube, radio, newspapers, print journals, at national conferences, and all over the internet. Also, Vince's original research materials, or copies of said materials, are stored in the National Archives (by request under Deed Of Gift by the ARRB), the John F. Kennedy Presidential Library, Harvard University, the Assassination Archives and Research Center, and the Dallas Public Library. Vince Palamara has become known (as he was dubbed by the History Channel in 2003) "the Secret Service expert." As former JFK Secret Service agent Joe Paolella proclaimed: "You seem to know a lot about the Secret Service, maybe even more than I do!" Agent Dan Emmett calls Vince a Secret Service expert in his new book.
View all posts by vincepalamara →
This entry was posted in Uncategorized and tagged 11/22/63, C-130, David Conn, Frank Roberson, Hershal Woosley, JFK, Roland Thomason, Stephen Bening, Vince Palamara, Vincent Gullo, Wayne Schake. Bookmark the permalink.