Posted on November 8, 2014 by vincepalamara

Leroy Blevins says of this image he is touting: “A clear copy from the original Dillard image. And Lee H Oswald can be seen looking out of the 6th floor window of the TSBD. No I did not alter the image all I did was colorized the image to get more details out of the image. When colorizing image you colorize it to separate one object from the other objects. This is why I colorized the image so people can see all the details in the image. As for Oswald face being on the 6th floor I have never and will never [alter] an image like that.  I like to say one thing here. I had a scan of this image for over 7 years now and the reason why I never shown it was because I knew that soon as I post it everyone will come up with the image was alter or one thing after another. This is why I never posted the image in the past. But in my research I show what I find and that is it. Now if people like to think the image was alter then be so that is your opinion and you have the right to it. But to say I alter a image or place Oswald face in the image is all false because you do not know me or anything about me. I took on doing research in this case for an eyewitness that ask me to do an investigation for him and I did it and now I am done. So if you do not believe in my research that is ok with me and that is your opinion God Bless” 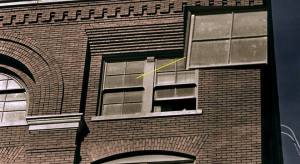 As Tony Hunt said: “If you blow up the picture, it’s one of Lee after he was arrested, superimposed behind the window. It’s amazing the lengths some &^%holes will go to promote the “official” story, isn’t it? Besides, he would have had to been WAY over 6′ tall to take that picture, given the distance from the floor to his head. Morons…….”

2 Responses to PHOTO OF LEE HARVEY OSWALD IN WINDOW AFTER JFK ASSASSINATION – FAKE!