Why Clint Hill is full of poop

Posted on November 9, 2014 by vincepalamara 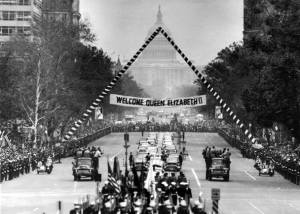 In addition to the above article/ link, SIX YEARS BEFORE DALLAS, here is the security afforded another king/prince and queen and, at times, Ike, as well (instead of America’s “king and queen”, JFK and Jackie), circa 1957 in America. Notice agents beside the partial bubbletop limousine, press photographers flatbed trucks in front of limo, excellent police and motorcycle coverage…and they couldn’t give President Kennedy and Jackie Kennedy AND LBJ, riding in the same motorcade for the first time (post-election), THIS kind of protection? What a crock of shit.

Keep writing those books, Clint (yep, he has another one coming out next year)- you’ll find the truth after collecting your millions someday.