Posted on August 5, 2015 by vincepalamara

As an author, I am much aware that the product information near the top of the Amazon listing can only be edited and placed by the publisher. With this in mind, this is the official product information for the U.S. Treasury release Report of the US. Secret Service on the Assassination of President Kennedy [kindle only; released 6/30/15; note: when you click on “U.S. Treasury”, other official publications come up]:

“Historical report on the JFK assassination. Never before seen evidence of Secret Service blunders that would ultimately transform the agency into one of the nations’ elitist law enforcement entitites [SIC].” 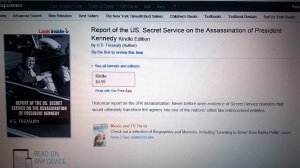 Here is my Amazon review:

MORE WHITEWASH that is free online; do not waste your money! By Vince Palamara on August 4, 2015

The Kennedy Detail Secret Service agents should be ashamed of themselves- they put out books for massive profits while peddling the blatant lie that President Kennedy ordered them off the limousine, with the direct connotation that this false order was the reason they failed miserably in Dallas (never mind the fact that they limited the motorcycle formation, did not guard building rooftops like they did 11/18/63 and for years before the assassination [FDR-JFK], took the bubbletop off the limo, failed to properly advance such a dangerous location as Dealey Plaza certainly was, etc.).

This is Commission Document Number 3 [CD3] and is free online. The product information is priceless: “Historical report on the JFK assassination. Never before seen evidence of Secret Service blunders that would ultimately transform the agency into one of the nations’ elitist law enforcement entitites.”

Vince Palamara
Author of SURVIVOR’S GUILT: THE SECRET SERVICE AND THE FAILURE TO PROTECT PRESIDENT KENNEDY

Here is the free online link [I am much aware of this report and deal with it accordingly in my book]: