R.I.P. Robert E. Lilley- one of the great ones; wonderful man; a big help to my first and third books

R.I.P. Robert E. Lilley- one of the great ones; wonderful man; a big help to my first and third books

Upon retiring from the Secret Service he accepted a position Chief of Corporate Security for a world-wide corporation comprised of 55 divisions. Bob retired from the USSS on a Friday commenced his new position Monday. He managed &amp; budgeted responsibilities of all executive protection worldwide while being responsible for security at headquarters, aviation security, internal investigations; revamping of the in-house guard force implementing &amp; establishing physical security for executive protection for all 55 divisions within the corporation. Bob had substantial national &amp; international contacts in law enforcement &amp; weekly contact with State Department, CIA, Secret Service &amp; Department of Commerce regarding political climates in foreign hot spots in order to assess travel dangers for each of the corporation’s frequent foreign trips.

Bob performed unparalleled service to his nation while demonstrating integrity, dedication and courage beyond measure. His achievements were defined by his subtle dignity &amp; warm personality. He was a man honor with strong Christian values and gracious demeanor. He was highly respected by family, friends, neighbors and colleagues. He made an impact and will be sorely missed by all who loved &amp; admired him.

May you rest well our Beloved “Protector” and know you are deeply missed. We have total faith we will all be together again somewhere over the rainbow. May you soar on wings of Eagles at “Mach 2” with President Kennedy at your side. Soar high beloved “007” and God speed! Good night strong humble protector until we meet again. (Timothy-Chap 2; V 7): “You have fought the good fight; You have finished the race; You have kept the faith!”

There will be a ‘Celebration of Life’ to honor Robert’s memory on Monday, August 24, 2016 at St. Joseph Catholic Church, 225 S. High Street, Bridgton, ME. To honor Bob’s memory, a donation may be made to the Salvation Army Headquarters, PO Box 269, Alexandria, VA 22314. 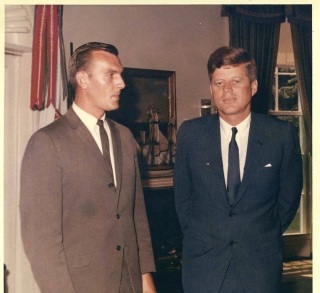 4 Responses to R.I.P. Robert E. Lilley- one of the great ones; wonderful man; a big help to my first and third books