THE NOT SO SECRET SERVICE 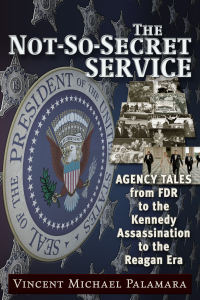 I am very excited about my third book THE NOT-SO-SECRET SERVICE: AGENCY TALES FROM FDR TO THE KENNEDY ASSASSINATION TO THE REAGAN ERA! This one is my best one yet! I know a lot of authors probably feel this way about their latest work, but, in this instance, it is the truth. My first one SURVIVOR’S GUILT is a very good textbook style volume that has a necessarily narrow focus (the JFK assassination), while my second one is openly a reference work (with the same narrow focus that, admittedly, is probably more for the serious student/researcher on the case). While I am proud of my first two books, this one is the most readable, the most diverse (FDR, Truman, Ike, JFK, LBJ, Nixon, Ford, Carter, Reagan era Secret Service), and contains some explosive chapters related to the JFK assassination that will really get people talking! It should be on Amazon (and elsewhere) for pre-order in 6-10 weeks from now (like the other two, Kindle, paperback and E-book formats…even the Nook. I am a proud TRINE DAY author. I even have a FOURTH book completed, but I am getting ahead of myself). I cannot wait for you to read this one! Finally- a book you can take to the beach that may make you not want to go into the water; too much to ponder! There are POSITIVE chapters in the book (not all doom and gloom or critical assessments), yet I feel the JFK-related chapters will really get people fired up! I am very excited about this one- can you tell?

Vincent Palamara was born in Pittsburgh and graduated from Duquesne University with a degree in Sociology. Although not even born when President John F. Kennedy was assassinated, Vince brings fresh eyes to an old case. In fact, Vince would go on to study the largely overlooked actions - and inactions - of the United States Secret Service in unprecedented detail, as well as achieving a world's record in the process, having interviewed and corresponded with over 80 former agents (the House Select Committee on Assassinations had the old record of 46 with a 6 million dollar budget and subpoena power from Congress), not to mention many surviving family members, White House aides, and even quite a few Parkland and Bethesda medical witnesses for a corresponding project. The result was Survivor's Guilt: The Secret Service & The Failure To Protect President Kennedy. Vince is also the author of the books JFK: From Parkland To Bethesda, The Not-So-Secret Service, Who's Who in the Secret Service, and Honest Answers about the Murder of President John F. Kennedy: A New Look at the JFK Assassination. All told, Vince has been favorably mentioned in over 140 JFK and Secret Service related books to date (including two whole chapters in Murder in Dealey Plaza, The Secret Service: The Hidden History Of An Enigmatic Agency by Philip Melanson, and the Final Report of the Assassination Records Review Board, among many others), often at length, in the bibliographies, and in the Secret Service - and even medical evidence - areas of these works. Vince has appeared on the History Channel's THE MEN WHO KILLED KENNEDY (VHS and DVD), C-SPAN, Newsmax TV, A COUP IN CAMELOT (DVD/BLU RAY), KING KILL '63, THE MAN BEHIND THE SUIT (DVD), National Geographic's JFK: THE FINAL HOURS (including on DVD), PCN, BPTV, local cable access television, YouTube, radio, newspapers, print journals, at national conferences, and all over the internet. Also, Vince's original research materials, or copies of said materials, are stored in the National Archives (by request under Deed Of Gift by the ARRB), the John F. Kennedy Presidential Library, Harvard University, the Assassination Archives and Research Center, and the Dallas Public Library. Vince Palamara has become known (as he was dubbed by the History Channel in 2003) "the Secret Service expert." As former JFK Secret Service agent Joe Paolella proclaimed: "You seem to know a lot about the Secret Service, maybe even more than I do!" Agent Dan Emmett calls Vince a Secret Service expert in his new book.
View all posts by vincepalamara →
This entry was posted in Uncategorized and tagged the not so secret service. Bookmark the permalink.

1 Response to THE NOT SO SECRET SERVICE