AMAZING DOCUMENT TYING DAVID FERRIE, GUY BANNISTER AND OTHERS TOGETHER

Posted on September 24, 2016 by vincepalamara

As author Flip De Mey said: “I suppose this document is part of the Ferrie-file in the case about his dismissal as pilot. The whole clique of Camp Street 544, New Orleans seems present: Banister, Ferrie, Arcacha Smith,… Ferrie’s involvement in the CAP is also mentioned. By pure coincidence the Camp Street address is stamped on Oswald’s ‘Hands off Cuba’ pamphlet, and by pure coincidence Oswald was one of the boys under Ferrie’s “oversight” in the CAP. Also by pure coincidence pilot Ferrie drove through a storm from New Orleans to Galveston Texas on 22 November 1963, without any reasonable explanation, to return at the very moment the killing of Oswald was made public. By coincidence Breck Wall -responsible for the Dallas chapter of AGVA- was also in Dallas and received at the very moment Ferrie arrived there a mysterious telephone-call from Ruby. Ferrie by the way was -pure coincidence- in the morning of 22 November at Carlos Marcello’s side. Mafia Godfather and Kennedy-hater Marcello gave Ferrie 7.000 $ that day, again without reasonable explanation. You can go on and on,… The document in itself proves nothing new. We know that these shady crooks knew each other, and covered each others lies, but it’s again an illustration of their conspiratorial behavior.” 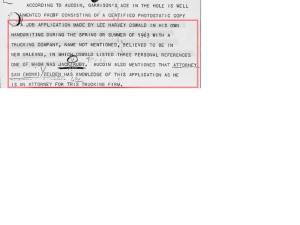