Posted on September 22, 2017 by vincepalamara

After the assassination, I was re-assigned to guard the presidential vehicle after it had been flown back to the White House garage. Several hospital staff members from Bethesda Naval Hospital entered the vehicle to remove scalp, brain tissue and bone matter from the back seat. While waiting for the Bethesda Naval Hospital attendants to arrive, I did notice what appeared to be a bullet-hole in the front windshield of the driver’s side. I do not remember if the glass remnants were on the inside of the vehicle or the outside of the windshield. If the glass remnants were on the inside of the car, it would offer some acceptance to the theory that at least one of the shots came from the front of the President’s vehicle.

I don’t remember anything out of the ordinary regarding my duties prior to the assassination other than several trips to the Kennedy residence in Palm Beach, Florida. I also recall an incident in Chicago involving a suspect who was planning to assassinate the President. However, I was not involved in that investigation and the threat was taken care of by the Chicago office of the Secret Service.

I believe Oswald was the shooter and though I am not a conspiracy buff, I believe if others were involved, I think the Mafia would be the only ones who could have pulled it off without someone later confessing involvement in the President’s assassination. In those days, Mafia members had a strict code that did not allow them to confess. It had been said that a New Orleans Mafia Don, Carlos Marcello, was heard to say, “If you cut off the head of the snake (JFK), the tail (RFK), would die.” At that time, Robert Kennedy was the Attorney General and was working against the Mafia. Shortly after the assassination, Robert Kennedy was fired and it took another 20-years before the F.B.I. made any headway against the Mafia.

For the first 1/2 hr of the show, Secret Service Agent Joe Paolella will comment on the General Petraeus affair. Joe will also tell us amazing stories when he was a secret service agent to four US Presidents, including JFK. Joe was the Secret Service agent responsible for guarding JFK’s limousine after the shooting. He noticed a bullet hole through the front windshield and never told anyone about this. About 40 years later, the first and only person he ever told was his good friend Dr John. 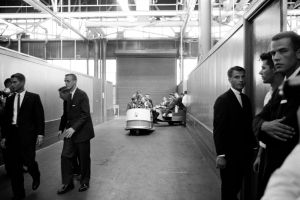