Posted on November 9, 2017 by vincepalamara

Wow! I was much aware that I was on several pages of Mark Lane’s LAST WORD, but I had no idea (until just now) that I was also on the cover of the paperback edition-sweet! I met Mark in 1992 as a mere fan at a book signing (my only credit was a mention in HIGH TREASON 2). 20 years later, Mark sends me an unsolicited letter, wishing to use my work for his book…and the rest is history…but I had no idea about the paperback cover 🙂 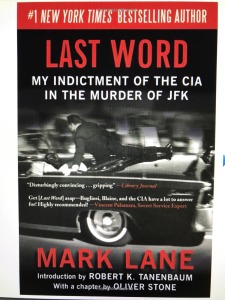