(another rare off-topic post) The State of the NFL…is just fine, thank you very much.

(another rare off-topic post) The State of the NFL…is just fine, thank you very much.

Yep, the NFL is in trouble—NOT! I KNEW IT: I religiously follow the Nielsen ratings (especially week-in-review wraps ups)…stats don’t lie: EVERY SINGLE WEEK, THE NFL IS NOT ONLY #1 BY A HUGE MARGIN, IT IS ALSO FREQUENTLY #2 AT THE SAME TIME AND #4 (THE FRICKIN’ PRE-GAME SHOW!!!). Democrat or Republican, no matter if you like it or not, it is what it is. A TV critic said the NFL’s average television audience is STILL 30-40 times larger than THE BIG BANG THEORY or NCIS or any other “big” show: 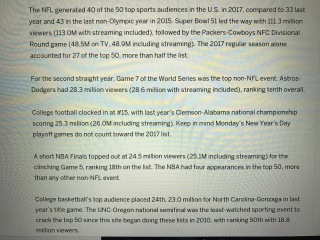 2017 highest rated NFL games- oh, the NFL is in trouble…NOT! Is all that stuff about ratings being down equivalent to this: “the world’s richest man WAS worth 210 billion dollars…now, he is “only” worth 208 billion”?

NFL attendance was outstanding (as usual) for the 2017 season:

From a recent article, typically lost amid the headline (a frequent trait I see lately)

“The NFL isn’t in a vacuum, as the viewership drop is indicative of the general environment as less television is being watched and cable subscriptions have declined. Despite the drop in NFL ratings, Nielsen data shows that the 20 of the 30 highest-rated shows on television in 2017 were football games. Both NBC and ESPN had the most-watched shows every single week, in terms of audience and in all key male demographics, for Sunday Night Football and Monday Night Football games this season.
NBC’s Sunday Night Football finished first in prime time this fall for the seventh consecutive year, besting “American Idol” (2005-06 through 2010-11) for the longest hold on the top prime-time spot since 1950. Its 18.2 million viewers beat the second-best prime-time show, Thursday Night Football on CBS, by 29 percent — its largest margin ever.
ESPN officials reported earlier in the week that the network grew its total day viewership in 2017 by 1 percent, while prime time was up 7 percent.”

Number of viewers for each NFL team in 2017:

see especially this one:

“All that being said, it’s important to remember that NFL games still dominate other live programming. 44 of the best-rated primetime TV programs of 2017 were NFL games. So think of it this way: primetime NFL games, for years and years, delivered outstanding ratings; now they deliver just very good ratings. As Wasserman advertising executive Elizabeth Lindsey told Yahoo Finance this year, “Football is football.” To big advertisers, the NFL is still the best game in town for reaching lots of eyeballs.

So don’t believe screaming headlines that declare the death of the NFL. The NFL is hardly dead or even dying—but it may have already hit its zenith of popularity. And the truth no one wants to acknowledge is that the NFL could afford to take a small haircut in viewership, and maybe even revenue, and still remain a major force in American pro sports.”

The super bowl AFTER the 2016 elections: the highest viewership ever-