Posted on December 12, 2019 by vincepalamara 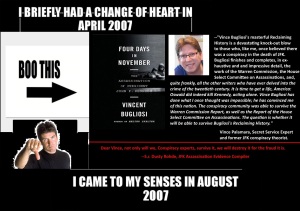 Yes, you read that right: for one brief, non-shining moment in 2007, I was swayed (groomed?) by Vince Bugliosi, one of my then-idols for his many non-JFK books: I am posting this (and the above modified meme) because someone recently “found out” that I had once changed my mind. Well, I still believed there were multiple conspiracies to kill Kennedy…I was swayed into thinking Oswald beat them all to the punch via Bugliosi’s book. And, when I received a personal letter from him before I was even finished reading his massive tome, I was sold. Life is all the context of the times—I was then recently divorced (since happily remarried), somewhat down on my luck (I never thought I would publish a book, let alone four), and was burned out on the case. My hero from the OJ and Manson murder books–Vincent Bugliosi–asked me for a blurb for the paperback version of his book (he told me it would be out in mid-late 2007). By the time the blurb came out, I came to my senses and denounced what I conveyed to him…but the damage was done. Too late; the blurb appeared in not only Four Days In November (May 2008). To my chagrin, it ALSO appeared in Parkland in 2013! Yikes!I know Pat Speer said he once changed his mind (I think he said as much on this forum). Deb Galentine, a pro-conspiracy researcher I also greatly respect, told me she also briefly changed her mind. I know a couple people who will never admit it, but they were swayed by POSNER’s book when they first read it (before the many scathing reviews came out). Heck, even in the movie “JFK”, Jim Garrison/ Kevin Costner says at one point “Maybe Oswald is who everyone says he is and I am just being dumb about it.”My point is this: I am very open-minded (perhaps to a fault) and, since I am in somewhat of a unique situation (my research does not stand or fall based on Oswald acting alone or not), it was easy to be star struck by one of my heroes who was requesting a blurb for his forthcoming paperback book. The stars lined up in the wrong way; the imperfect storm, so to speak.I rarely get any flack over this now, although I know Walt Brown, Charles Drago and a couple others held it against me and probably still do. Oh, well: I own my mistakes.I just wanted to vent here for the record so any stragglers out there are not in the dark. Vince Palamara